We don’t typically see the air we breathe so most of us assume it to be healthy and safe. However, indoor air can be more polluted than the air outdoors. Indoor air pollution emanates from human activities, the products we use and outdoor pollution coming inside. Unfortunately, poor air quality can have a profound effect on our health and wellbeing.

The device I created has sensors to measure indoor air quality and has a mobile application to transform sensor readings into a user-friendly form. 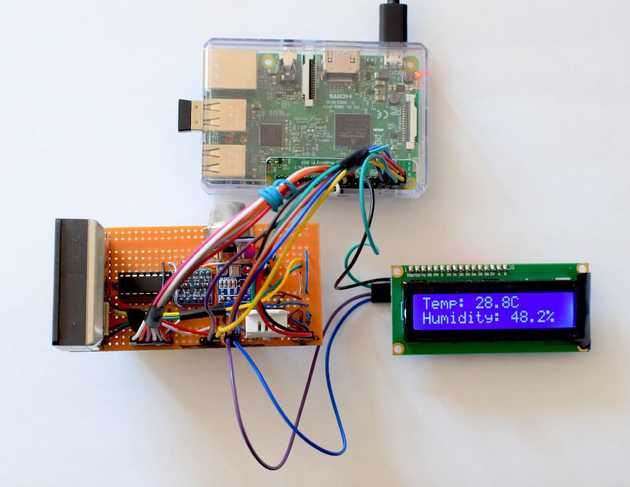 I wanted to make the device affordable so I decided to use Raspberry Pi and four inexpensive sensors to measure the air quality factors:

I soldered all of the sensors onto a board and connected them to the Raspberry Pi using GPIO pins. Since Raspberry Pi is only capable of reading the digital signal, I had to convert an analog signal into digital. To do that, I used a low-cost, 8-channel, 10-bit analog-to-digital converter. Sorry for my messy soldering ;) 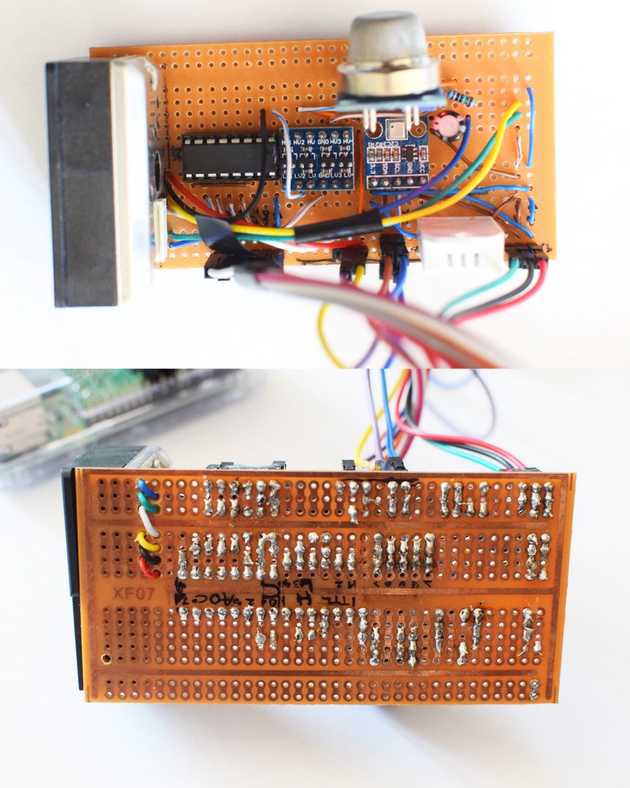 To read the sensor measurements, I wrote a small script in Python which runs on the Raspberry Pi. It collects data from all of the sensors and stores them in an external database. The collected data can then be used for analysis. For some of the sensors, I used open-source Adafruit libraries. They allowed me to easily access and read sensor measurements to later present them in a user-friendly form. 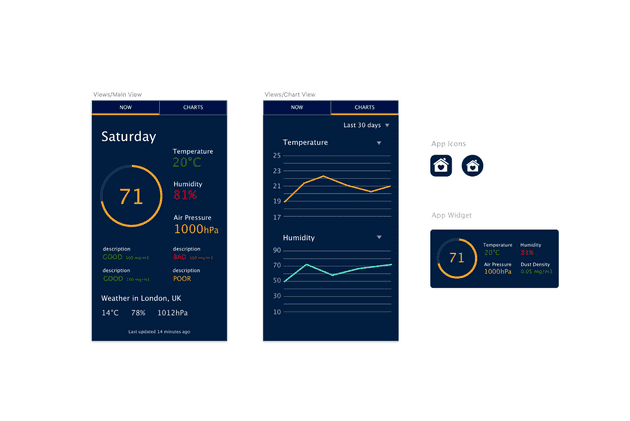 Additionally, I built a mobile application. That allowed me to visually present collected measurements in order to outline the major factors of air pollution. The app was created using the JavaScript framework, React Native. 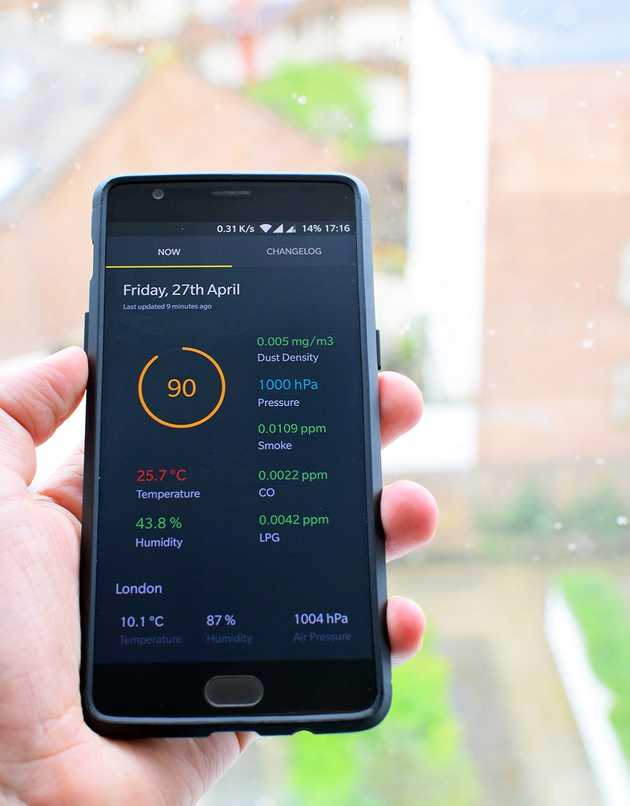 Like any good mobile app, the air quality monitor system needed to transfer sensor readings to the user in a user-friendly form. After all, the purpose of mobile apps is that they’re easily accessible, simple to use and easy to understand. Therefore, on the main screen, I opted for colour scales, which should help users to understand the air quality readings at a quick glance. Also, I included an index score, which helps the user quickly view the air quality at home. 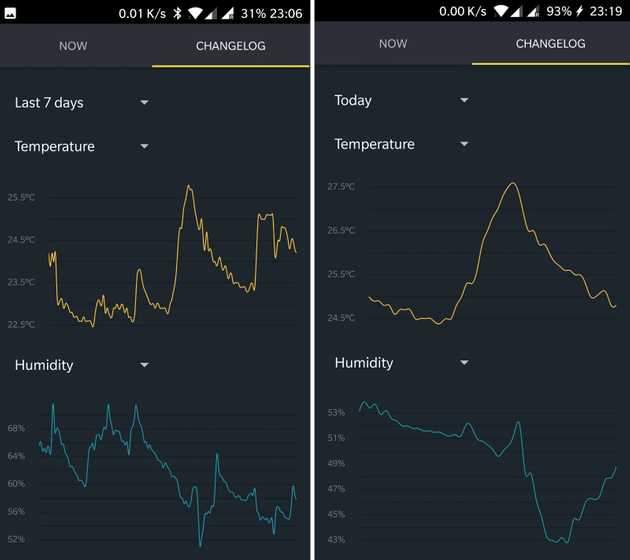 The user can then tap through to a second screen. This shows the data logged over a period of time, which is presented in a visual way using simple line charts so that the user can see and make sense of the patterns in the collected data.

During various types of testing, the device was able to detect an increase in the level of fine particles while using a vacuum cleaner or peaks of relative humidity caused by some specific human activities indoors, such as taking a shower.

I also evaluated my own measurements against open-source weather data. This experiment was conducted outdoors and, since most of my own readings were very similar to the results from the public weather API, it allowed me to determine the accuracy and precision of at least two sensors used in this project. Additionally, this test showed different conditions that can be observed outdoors as well as more frequent changes, which usually takes more time to spot inside a building. 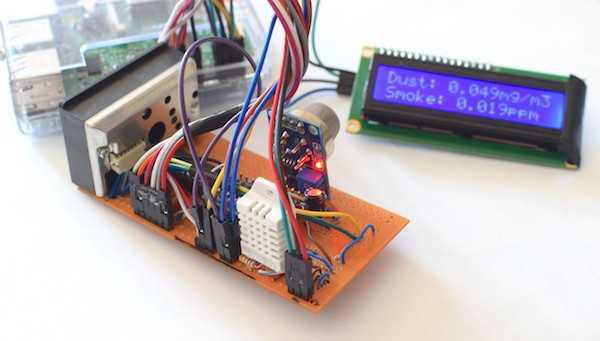 Although the sensing system I created cannot be relied upon when, for example, detecting gas concentrations, it can still deliver useful data and is very easy for anyone to use if they wish to improve indoor air quality.

Further extensions can be made to the device, such as building a custom case or implementing additional sensors. Another possible improvement would be to replace the current optical air particle sensor with a more accurate laser-based sensor, which uses the light-scattering method to detect and count particles.

Overall, I’m happy with the air quality sensing system that I developed. Even though there are limitations because of the use of low-cost air pollution sensors, it has shown significant potential. Since it has the capability to track major air pollution factors, I’m planning to continue to use it in order to improve indoor air quality at home.

There were some obstacles to overcome during the implementation. For instance, reading the analog signal sensors using Raspberry Pi proved to be more challenging than I initially thought. This could be improved with a better choice of single-board computer and, if I was to choose the hardware again, I would probably go with Arduino, which has a built-in analog-to-digital converter.

In case you want to follow my exact steps, here is my setup:


The total cost of all components and the Raspberry Pi was around £60.

You can find all my code at Github:
Python script
Mobile app

I want to give a shout-out to Raspberry Pi community and to all people who use Raspberry Pi and share their projects and knowledge. Many of the projects made with a Raspberry Pi are openly available and very well-documented. During this project, I read many articles and tutorials, which helped me improve my knowledge of the tools available and, in turn, helped me develop my own device. It is extremely inspiring to see what people do with those tiny computers, and the help that people offer when you run into any problem is both kind and reassuring.

Thanks for taking the time to read my blog post. Don’t forget to share your project if you’re building something with Raspberry Pi!